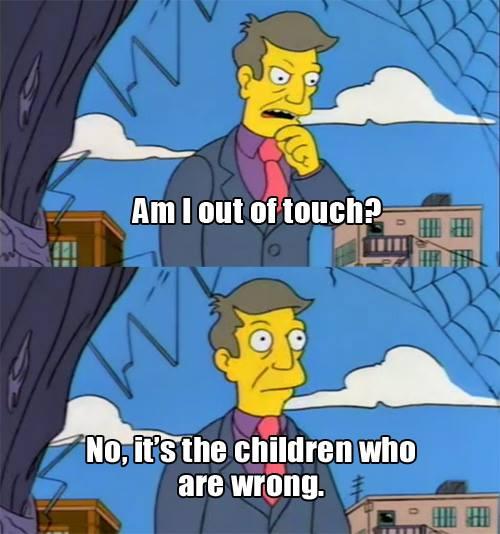 A random fact that I love:  in Ancient Greece, they invented the term “barbarian” to refer to anyone not speaking Greek because the language of Greece’s neighbors used the sound “bar” way more than ancient Greek.  So to them, all these foreigners just sounded like they were babbling “bar…bar…bar..”

Of course, the Greeks were not surrounded by uncivilized masses.  The people they disparaged were from great empires — the Egyptians who created libraries, the Phonecians who created the world’s first alphabet, and the Persians whose empire spanned three continents.  But to those who couldn’t understand their language, they represented an undifferentiated and inferior people.

And that, of course, brings me to teenagers…

Back in 2016, I had begun working on a team at Facebook building apps for teenagers.  Around that time, a friend texted me this article: "Teens are now throwing backpacks at each other for.. you guessed it, the Backpack Challenge."

"How," he asked, "Can you build products for these weird, sociopathic kids?"

It's  a question that I got a lot while working on that team. And it took me a while to appreciate that what looks like barbaric behavior to the casual observer, almost always has some deeper root to explain it if you're willing to look for it. Teenagers usually shape trends, and it's not just because being young is connected to being "cool." It's because when you're younger, and you have more time, you're willing to approach things with fresh eyes, and because your human experience hasn't yet had time to harden behind the walls of irony that you need to survive in your early 20s.

I came to understand this by missing the potential of the greatest consumer product of the last five years: TikTok. Way back in 2016, we had started paying attention to this app called Musical.ly.  The app had gone viral in 2016 and helped teenagers to create 15 second lip sync videos.

I think I understood the backpack challenge better than I understood this. Who were these teenagers that were bored enough or lonely enough to create mini-music videos of lip syncing to pop songs? There was literally no amount of money, and likely no amount of alcohol, you could give me that would make me want to do that.  But kids were doing it.  Every day.  For free.

What fucking barbarians. I remember trying to shut down any conversation about working with Musical.ly or trying to do something similar.

If you run in tech circles, you know how this story plays out.  Musical.ly was purchased by a Chinese company called ByteDance in November 2017, and shortly later, the same core concept and same sad, lonely user base powered the growth of TikTok, the fastest app to a billion users in history.

In my rush to judgment, I had made the "Barbarian Mistake," and in doing so, missed out on all the joy that TikTok was creating for these teenagers.  I missed that singing karaoke, or doing a stupid dance, and going viral fulfilled the adolescent need (and let's face it... human need) to be seen and validated for performing. I missed that these bitesize videos were the perfect content to share in an iMessage group to say, "have you seen this?!"

Instead of labeling them as crazy for seeing something that I couldn't, I should have probably followed Ted Lasso's advice: Be Curious.

It's an approach that has served me well since then, and one that I'm bringing with me as I explore new ideas these days.