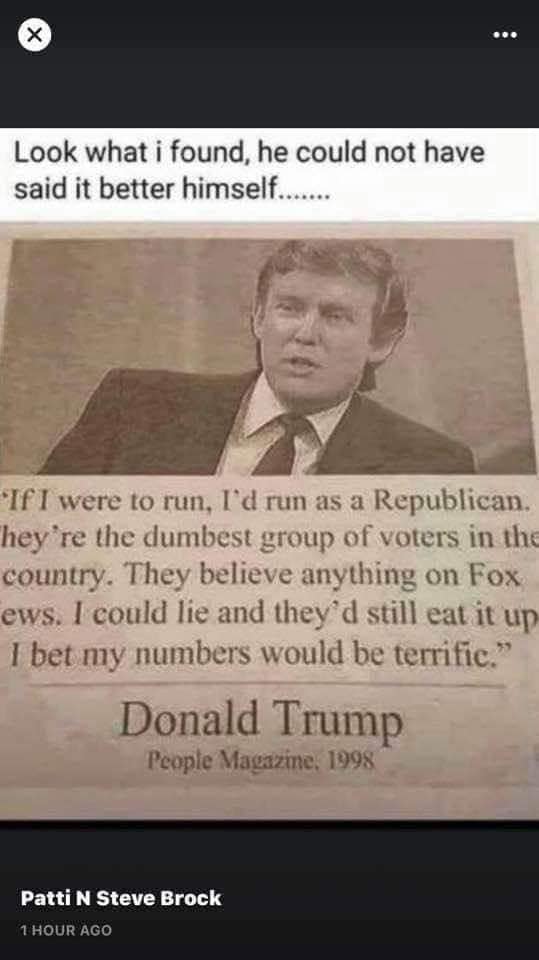 I have a confession to make:  I shared misinformation during the 2016 election.

I shared the meme in the above cover photo, a "quote" from Trump that says: "“If I were to run, I’d run as a Republican. They’re the dumbest group of voters in the country. They believe anything on Fox News. I could lie and they’d still eat it up. I bet my numbers would be terrific. - People Magazine, 1998”

I'm telling you this because while it can be easy to see the stream of misinformation that comes from the right wing fringes, it is often less easy to discern when I or my progressive friends are spreading misinformation.

While every academic study (OSU, HKS, CU) does conclude that conservatives are more likely than liberals to share misinformation (so no false equivalence here!), they also conclude that the left shares a lot of misinformation (so also no complete liberal victory here!).  And the more strongly someone holds to their ideology, the more likely they are to pass along lies aligned with it.

Look, bad actors do exist, but too often when we confront people that have shared or become persuaded by misinformation, we assume the worst.  They are dumb, they are evil, they are willfully ignorant about the world.

But I don’t think the 2016 version of me that shared that meme was dumb, evil or ignorant.

It’s a beautiful philosophy, and one very aligned with the rationalist and free-speech traditions on which America was founded.  It’s also the one taught in economics classrooms at our nation’s top universities.

But the problem with it is simple: humans are not rational.

My motivation for posting this lie about Trump was not a rational calculation or evaluation of the idea.  My own rational faculties were paused in the face of a meme that I (1) felt was likely to be true based on who I understand Donald Trump to be and (2) that I wanted to believe based on my desire to delegitimize his candidacy.

Why did I believe it to be true?

Well, first, like most humans, I think using Bayesian reasoning. If something seems consistent with what I already know, I am likely to accept it without questioning.  If it seems shocking, I am likely to demand exceptional evidence.  This post didn’t seem shocking.  It seemed, if anything, highly probable given what I knew about Donald Trump.  So I accepted it without questioning.

Second, motivated reasoning is a powerful thing.  I wanted this quote to be real. I didn’t like Trump.  I didn’t respect people that were supporting him.  And so seeing this quote felt really good.

My tribe was in the right, yet again!

This isn’t a unique experience.  Most research today supports the idea that political thinking is emotionally motivated rather than purely rational, and our emotions bias how we perceive any logical arguments.

So here’s the problem:  we have an information environment that incentivizes appealing to our emotional biases, and we, of course, have all those biases firmly implanted in our neurons. So.  How do we ameliorate this problem?

Well – first, we should develop an idea of what success actually means. I’ll go ahead and define it from my perspective:  success means a marketplace of ideas where individuals are best equipped to sort out truth for themselves, and where the ideas that are most effective for society regularly win out.

That’s a hard get.  But I think there are a few tools we have at our disposal to get there.  What we don’t have are easy answers.  So let’s throw a few of those away up front.

If we believe fact checkers, we might take down misinformation as soon as we’re confronted with a “misleading”label on social media.  But Facebook andMIT have both run studies demonstrating that people are more likely to distrust the fact-checker of a post they believe than the source of misinformation.

And, lest my liberal friends think this is just a conservative phenomenon, the particular meme that I shared triggered some of the Online Left to claim that the quote from Trump was real and that it had just been scrubbed from the internet by nefarious forces.

We can also look at less obvious, but still clear examples of progressive misinformation – like the idea that inflation is caused by greed, or that Facebook is listening to your phone calls, or that there’s clear evidence that Trump actively collaborated with theRussians (I admit to falling for that last one, too).  It isn't, they don't, and he didn't.

This is, unfortunately, more difficult than just labeling things as fact or fiction.

Ah, the easiest answer.  It’s so elegant — misinformation is bad so why do we allow it at all?

The best form of government, after all, is a benevolent dictatorship that shares my values.

But the problems here are as obvious as the advantages:

1.  The good guys are rarely the ones banning books.  Fascists, totalitarian communists, religious fanatics --not a great set of fellow travelers down this road.  The line between trusting authorities and trusting authoritarians is a subtle one.

1.  If we are wrong, who will ever trust us again?  As we have seen over the COVID pandemic, when even well-intentioned best-available information turned out to be wrong -- folks who felt justified in their skepticism were unlikely to ever trust authority again.

2.  When we censor, we lose an opportunity to hone our arguments.  If we’re going to take down others’ opinions, let it at least be after we have done the work to show why they are wrong.  When we fail to do that, we’re not just undermining our values, we’re losing a chance to use our own reason to prove them wrong.  In doing so, we become weaker in the process.  The most effective challenge to Joe Rogan, in my mind, didn’t come from Neil Young, but from the Doctor who debunked his myocarditis claims live, on-air.

In generations past, religious traditions used shame as a tool for compliance. Failing to adhere to the official word caused condemnation.

These ideologies were toxic not only because they sought to impose “truth” on others, but also because, in shaming people, they taught us to hate our own human vulnerabilities.

Have sexual desire?  Well, sex is dirty, and you’re bad for wanting it.

To be sure, there are legitimate bad actors out there, and we should stand up to them.  But attempting to confront everyone about all their failings at every waking moment?  That’s not activism, that’s sadism.

Here’s the truth: humans are complicated.  None of us are perfect. And shaming is not only morally wrong, it’s strategically ineffective.

A study on vaccine misinformation published in Nature found that those who actively spread misinformation see shaming as an opportunity to grow their ranks.  While the pro-vaccine experts and lay-folks shamed people who had questions about vaccines, those who recruited for anti-vax positions saw an opportunity:  “Hey,”they say, “You’re not a bad person.  You just have questions.  I had questions, too.  Here’s what I learned…”

The “fringe” understands that the war over ideas is won by reaching beyond the faithful to win the hearts and minds of the general population.  Those of us who are so confident in our view of the right would do well to follow their example.

As Josh Lyman explains to an overzealousToby in the West Wing:  “You want to beat them.  And that’s a problem for me because I want to win.”  Winning is more important than feeling righteous.

So if shame and censorship, don’t work, what might?

In my eighth grade civics class,I learned that the job of every good citizen was to read the newspaper, form an opinion and use that opinion to participate in our democracy.  And because this was 2004, we also learned not to trust anything that was on the internet.

I would go further.  You shouldn’t trust any single report you read from any media.  This isn’t about “fake news” – this is about critical reading. There’s a reason that in the sciences, a meta-analysis is the gold standard of research.  Only when lots of independent observers reach the same conclusions do we have strong conviction in a specific position.

We should apply the same test to our media – what does the AP and Fox and CNN agree on?  That consensus set of facts is useful.  Where do they disagree?  What more can I learn to discern whose position is closest to truth?

And as we learn to appreciate the limits of others’ singular perspectives, we would do well to appreciate our own limitations, too.  We are not third-party observers.  We do not have Gods eye views.  So some epistemic humility would do wonders.  We should approach our own takes with a critical eye – understanding our tendency toward motivated reasoning, or false memories or in-group thinking. The best defense against bad information isn’t only allowing “good information.”  It’s real, honest-to-God critical thinking skills.

Another option is to —ironically—take a cue from vaccination.  Rather than hiding and sheltering people from “wrong” ideas, why don’t we preemptively introduce and debunk them?  Why not anticipate or identify common misinformation, “Vaccines cause myocarditis!”, by conceding the point (which, like a vaccine, hurts a bit in the short term),while teaching the person how to combat it, “But the reality is that myocarditis is far, far more common in individuals with COVID than in those vaccinated.”

Like vaccination itself – a small exposure to the discomfort of a wrong idea can prepare our citizenry to better confront the disease of misinformation.

If we want to repair our information ecosystem, we’re going to have to get down and dirty in the marketplace of ideas rather than regulating it from afar or attacking people who fall prey to bad actors.

To be sure, it’s messy, undesirable work. I don’t relish wading into anti-vax conversations or pointing out to ideological friend or foes that they are misinformed.

But as Winston Churchill once famously said about democracy, it’s the worst option — except for all the others.