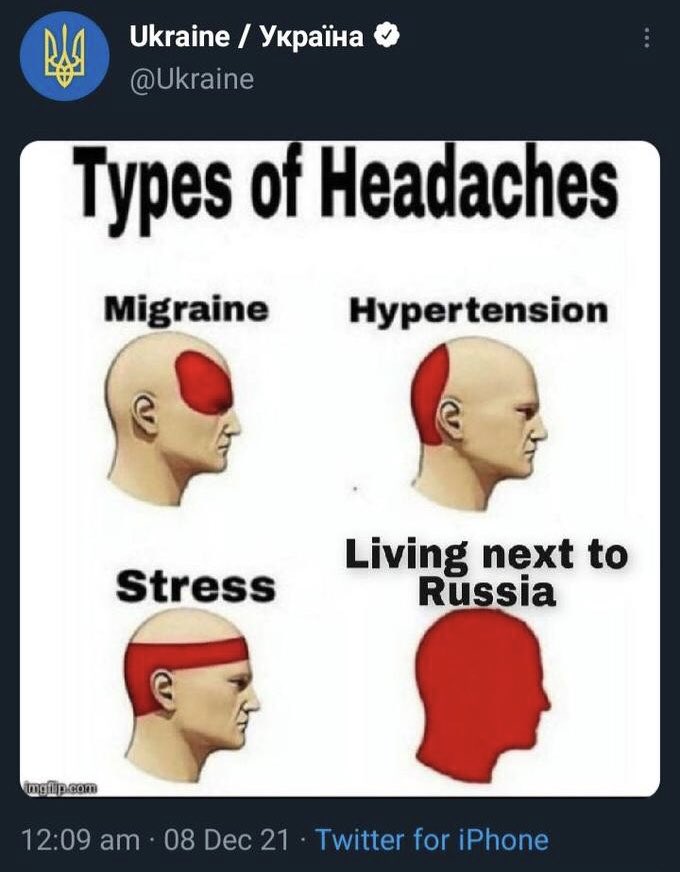 The Memes of War

So - usual disclaimer:  I am not a political scientist or foreign affairs expert. Nor do I play one on TV.  But I am somewhat of an expert on social media and memes. And since this conflict has played out for my friends and me largely via those platforms, I thought it would be interesting to think about how that media is shaping our experience of war.

As a thought experiment this past week, I asked a friend what World War II would have looked like in the social media era.

Would seeing Hitler invade Poland via Facebook Live have made America more likely to get involved in 1939?

Would seeing American troops die in large numbers in the Pacific during 1941 and 1942 have forced Roosevelt to sue for peace before we could demand unconditional surrender?

Could we really have dropped a second atomic bomb on Japan if we had seen photographs about the fallout from our first attack?

There’s a theory that television caused American resistance to the Vietnam War. Rather than seeing heroic clips of their boys claiming victory in World War II newsreels, Americans saw 19 year olds being murdered and maimed every night on the News, and that visceral experience made conducting war impossibly costly for the US government on the home front.

So I don’t think it’s an accident that Putin, the same guy who used social media to create informational chaos in 2016, has largely shut off social media in his country while this war is happening.

At this point, we accept social media as part of our political life, but this is the first time where it feels like our nation’s entire collective social media attention is focused on a war.  And, if Fukuyama’s End of History is wishful thinking, then this won’t be the last time we trade tweets about supply lines and guerilla tactics.  So it’s worth thinking about how this particular form of media shapes our understanding of conflict.

I have not been able to reduce this to a clear narrative — social media Good! or social media Bad! — but instead, I’ll share five observations about the good, the bad and the ugly of this week online.

On the first day of the conflict, I watched as Twitter, Facebook and Instagram sprang to life with that time-honored signal of social solidarity and virtue signaling:  the profile picture change.

I grew up in the 1990s under the blanket protections of the Pax Americana.  American millennials grew up believing that we would inevitably take our rightful place as leaders of the free world.  So to see my generation reduced to showing solidarity by adding a flag to our thirst trap profile pictures?

It’s a sad commentary on how far we have fallen. I’m sure I would have added a “Nazis Suck” profile picture frame to my vacation photo profile pic in 1939, but was that really the best we could do?

Yet I understand that doing something — even this — is better than nothing when you have no other actions available.

That excuse, however, will not save our leaders.  Issuing statements that you “stand with Ukraine” while signaling the limits of our commitment is the height of hypocrisy. The fact that Biden had to explain how he would keep oil prices down while addressing an invasion of an ally should speak volumes about how deep our commitment is to our values — roughly 10 cents per gallon.  So much for the Kennedy-era “bear any burden, pay any price” for freedom.

Less than Six Degrees of Separation from the Conflict

When you read about conflicts in the New York Times, you see people experiencing tragedy, but they are not people you know.  That degree of distance allows us to keep conflicts academic.  How does it change our perception of conflict when we can point to our friends who have family in harms way?

I’m reminded of a NYT line about COVID (that, in that case, turned out to be a bit too optimistic):  “Crises are only political until they become personal.”

On Tuesday, tweets deriding the Biden administration rolled in.  He was old.  He was weak.  He had proven in Afghanistan that America couldn’t be trusted.  The man who ran to defend the liberal order had actually heralded its end. 62% of Americans though the guy that was impeached over not providing military aid to Ukraine to defend itself against Russia would have done a better job keeping that same Russia at bay.

The liberal order looking poised to exert its will on one of the world’s strongest countries and most obnoxious strongmen.  All of this orchestrated by the expert, subtle, careful diplomacy of the Biden administration.  Sometimes good things take time, but our micro-attention span can hardly abide that.  That’s a problem for Grand Strategy.

Back to a more sobering note, memes are not munitions. The problem with social media is that it can be difficult to separate narrative-memes from reality-facts.

By looking at the string of heroic Ukrainian defenders on my timeline, I might think Ukrainian victory was at hand.  I hope it is so, but this is most likely not the case. Russia is still a massive military power, and while the Global Community may be demonstrating the costs of war to Putin’s circle, it is unlikely that Ukraine will be restored in a few weeks to a functioning, flourishing democracy.

Kiev will probably fall to invaders even if Russia will find it difficult to hold.  Thousands more will be killed.

And, what’s going on in Putin’s head?  Well, no one really knows.  I see videos of bank runs and protests coupled with analyses that the war remains popular and the Central Bank able to stave off catastrophe.  I see reports that Putin is isolated and irrational coupled with reports that his grip on power is absolute.

Without a reliable overview of the reports, it’s difficult to develop a clear opinion about the state of affairs, or to manage our collective expectations about what will come next.

It’s also difficult to know where to direct our advocacy if we want to be helpful.  Should we be advocating for the US to stop importing Russian oil (turns out they’re our number one supplier)?  Should we be asking for our government to accept refugees or establish a no-fly-zone?  Are these pressures we should apply to Congress or to the President?

Until we figure that out, we’re left mostly helpless on this side of the screen.  And so we see the crisis of social media writ large:  way too much emotional information, way too little context for understanding or productive channels for our energy.

Well, I mean, I guess we can always change our profile pictures.

All the President's Memes

When the first photos, tweets, videos came in from the Ukraine, we saw the expected horrors.  Facebook used to have signs up that said, “The invisible victim is the world’s biggest problem.”  But after the string of crises that have defined the last seven years, it might be more accurate to say, “The numb spectator is the world’s biggest problem.”

How do you get the world’s attention in the midst of an endless string of crises?  You give them something that years of crises have convinced them not to expect: a bonafide hero: President Volodymyr Zelenskyy.

If the medium is indeed the message, President Zelenskyy found the exact right medium.  Short, humanizing videos that put his viewers around the globe directly in the action, allowing them to experience both the fear and the resolve of actually being on the ground with the Ukrainian forces.  By showing you his experience, he literally invited you to imagine yourself as a fellow hero.

If Zelenskyy had fled Kiev, or issued a statement from an underground bunker, I’m not sure the conflict plays out this way.  Do Ukrainians resist heroically?  Does the rest of the world rally behind their resistance? Thankfully, the President did not turn to his PR team. Instead, he crafted a meme.

We trivialize “memes” because we think of them as grainy photo templates with funny captions, but the term long predates viral jokes. Biologist Richard Dawkins coined the term to describe it as the basic unit of culture, similar to a gene, that can be used to transmit ideas.  A meme, like a virus, infects hosts as it spreads and mutates to new forms.  They can be devastating in their efficacy — just ask Hillary Clinton and her circle of pedophilic elite friends.  But when they have the added layer of truth — they can spread through traditional media, as well.

TikTok works as a viral platform because it creates memetic templates that other users can then mimic and extend. Zelensky created his own meme template.  Rather than a dance or lip sync, he created a template of heroic resistance.  And his people bought in.

So, inspired by their viral President, Ukrainians flooded our feeds with endless videos of their standing up and fighting for freedom from a hostile foreign force.  With every reshare of a tweet about Zelensky’s “I don’t need a ride” quote, or video of smoking Russian tanks, a new collective narrative was taking root:  a righteous battle of ordinary citizens against an evil empire.

Could such a narrative have taken form without social media? In a world where the world shapes its opinions via network news or via newspapers, does the collective consciousness coalesce so quickly around “good” and “evil”?  Do governments change their opinions on sanctions and providing arms within hours?

I can’t imagine that would happen.  Now, less than a week into Russian mobilization, Putin’s state is cut off economically from the rest of the world.  Even Switzerland, the paragon of neutrality, has bowed to global pressure and announced punitive sanctions on Russian finances.  Win or lose, Russia (and its influential oligarch class) is now irrevocably disconnected from the global order.  There’s no easy off-switch for these punishments.

That’s not something that a single country or leader did.  That’s something that Ukrainian heroes and a global network of social amplifiers did.  The internet, as they say, is undefeated.